Yahoo says "Save $250/month"... unless you're already a financially responsible individual

Popped onto Yahoo this morning and aside from the terrible news coming from Chile (what's with all the devastating earthquakes?) there was an article on how to save $250 a month. They've had a number of similar articles in the past, all trying to help their readers reduce their monthly expenses. Problem is, in almost every case, the "savings" are made up by eliminating things that most rational people should have already eliminated if they were facing true financial woes. 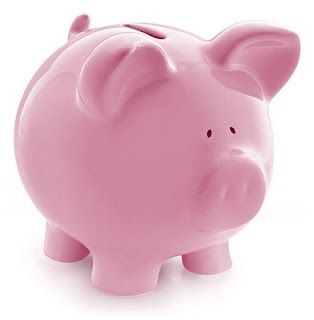 1) Pause your Netflix subscription ($14)
To fend off outright cancellations of their service, Netflix allows users to "pause" their subscription for up to 90 days (think of it like a vacation stop at the Post Office). Too bad I canceled my subscription last year. Money + Toddler + School = no really good time to sit down and watch a 2-3 hour show.

2) Switch to generic birth-control pills ($21-31)
Makes sense since generics are cheaper but still as effective. Except if, like me, you have a Y chromosome. I know they make cheaper condoms, but I'd be willing to bet that route of "swapping for generic" is a bit riskier...

3) Instead of having a drink with dinner, get free appetizers at the bar with your drink ($40)
Not sure where they're eating, but they claim that restaurants are offering free apps with a bar purchase to draw in customers. Would work for me if my doctor hadn't diagnosed me with a fatty liver last year (another reason I'm altering my eating & exercise habits this year). Also, I'm willing to bet that chips and salsa and chicken wings aren't many people's idea of a balanced diet.

4) Ask your stylist to leave your hair wet ($15-20)
Apparently most haircuts have an included cost for drying your hair and by skipping this your stylist will reduce their fee. If blowing your hair dry adds $15-20 to your haircut, how much are you overpaying to begin with? Again, this is a case where that Y chromosome affects this tip because most men's haircuts cost far less than women's, but my haircuts cost less than $15 to begin with. I may not have the most stylish hair, but I'm no longer willing to pay $50+ for a salon (though I am above having my wife or a friend cut my hair... did that once, never again... unless they have some history and glowing testimonials.) Besides, given most people's relationships with their stylist, they'd be too embarrassed to ask about excluding the blow-dry.

5) Unlock your iTunes library ($10)
Call me a troglodyte here, but although I won an iPod Nano at a convention some years back, I've only bought a handful of songs on iTunes and probably haven't used it for a good 4 years now. I couldn't even begin to explain to you how this "share" option works, and they don't explain it in the article, but it sounds an awful lot like some type of limited peer-to-peer sharing scheme... wasn't iTunes supposed to end all that?

6) Buy unpackaged produce ($5-10)
The thinking here is that by slicing your fruits and veggies yourself, you save over the pre-packaged variety. And the article says you'll save "tons". Does $5 sound like "tons" to you? Also, what about those of us who only get close to veggies when they're called "guacamole" or "ketchup"?

7) Don't buy new shoes, repair them ($55-60)
It's about the point when they start talking about how much a new pair of stilettos will cost that I realize this is not only an article aimed at women, but it's also from the "Shine" section on Yahoo, which is apparently their answer to printed women's magazines like Cosmo. As for this tip, I've repaired shoes in the past and got less life out of them than if I had bought a new pair and you can only repair them so many times. Why not try buying cheaper shoes instead? Or fewer Choo's... er, shoes. And what Carrie Bradshaw wannabe would be willing to repair the heel on last year's fashions anyway...

8) Your insurance plan may reimburse your gym membership ($20-25)
If you have a gym membership. I had one for years... never went. Now, for the sake of my sanity and the same reasons I canceled Netflix, I don't have one. No use trying to convince yourself you're going to use it if you never have the time. Unless you're big into aerobics or yoga, it's probably cheaper in the long run to buy a used Bowflex off craigslist and start jogging around your neighborhood. You'll save money and might actually meet your neighbors.

9) Hold a rotating potluck dinner with your friends once a week ($60)
The article says "dinner parties" but the reality is that it's probably going to feel a lot less expensive and stressful to just make one dish than to have to cook a full 3 course meal for 5 or 6 people. And then there's the week when you have to eat at the friend's house who can't cook, or the friend who comes to your night, but is never able to host it themselves. Better to just have everyone bring a dish, then the friend who can't cook can bring something simple like carrots & dip and the deadbeat friend never has to host. Regardless, this takes a lot of coordination, though it seems like it might be fun... I'll have to talk to my friends about this, though they'd probably be just as happy meeting up at a bar for drinks and those free chicken wings.

10) Use your old jewelry creatively ($15-30)
Again, not really applicable for guys. Also, I don't know many women that would know how to turn an earring into a pendant or even have the desire. Fine for the crafty set... go save you crafty people you!

11) Buy liquor at club stores ($12)
Unfortunately, North Carolina still hasn't gotten past some of the outdated post-prohibition era formalities, like the fact that you have to go to a state-run store to purchase anything stronger than Budweiser. So no Costco vodka here and definitely no Beverages & More. I'm told that we do end up paying less than we would because the state keeps their margins low, but it's effectively a monopoly, so you really can't perform a proper comparison. Then there's that pesky liver.

12) Switch to dry pet food ($10-35)
We've never fed wet food to the dogs, so this doesn't apply to us. Dry food is healthier (as the article also states) and though the wet food is tasty I'm sure, it's mostly a case of us anthropomorphizing our pets by thinking that steak tastes better than oatmeal and assigning the same logic to their taste buds. My dogs love the dry stuff just fine. Make the switch to dry and you'll also save on vet bills related to dental issues later in life.

Conclusions: All in all I could save $60 of the proposed $250, but is the extra time needed for coordination, cooking & travel worthwhile? How much could you save?
Posted by Gomberg at 7:38 AM 1 comment: Links to this post

So how's that portion control thing working out for you...

Yeah, we won't discuss what I had for lunch. Suffice it to say I'm going to have to take a much sterner look at how I approach ordering food and how much I actually eat and how much I take home. 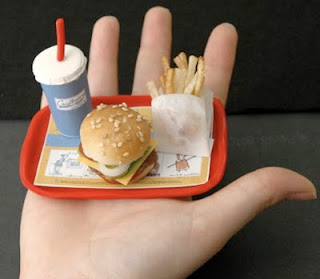 As for weigh-in this morning I lost 1.7 pounds but gained 1/4 inch. The increase in my waist might be due to the sit-ups, who knows. I'd feel better about the weight if it wasn't coming off pounds I'd put on during the Superbowl and while my parents were visiting. I guess the positive spin is that I'm at least moving in the right direction again without much effort beyond my 3 modifications (no soda, simple exercises, portion control for those keeping track).
Posted by Gomberg at 9:31 PM No comments: Links to this post

Anyone who knows me well knows that I've struggled with my weight for most of my life. I'm not morbidly obese, but I'm by no means skinny.

With the exception of the first 9 years of my life - when my parents feared that I was malnourished because I wouldn't finish my Happy Meals - I've always been either overweight or dieting. Those Happy Meals I didn't finish turned into Double Western Bacon Cheeseburger Meals that I'd chow down without a second thought just 4 years later, which put me in a weight class in PE Wrestling with all the really tall, really buff guys in my grade. Needless to say, I didn't like PE.

Throughout it all - the weight gain, diets, weight gain, etc - I've remained largely unchanged (no pun intended). Short of restricting myself to veggie sandwiches at Subway, I've tried most of the diets out there, some more seriously than others, but all with the same results... I fall off the wagon and gain it all back within 6 months.

So this year, I've decided to take a different route. No fad diets, not even going to concentrate on weight. I'm just going to make small tweaks to my eating habits and lifestyle to improve my general health. And if I lose weight in the process, great, but it's about getting healthy first and foremost.

To this end, I gave up soda on January 4th and have not had a drop since. My close friends may now pick their jaws up off the floor. My 6-pack a day habit was the stuff of legend. I'm not off caffeine - still drinking green tea at work - but at least I'm off the sugar. 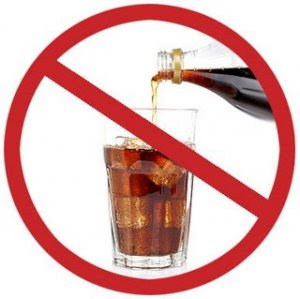 The green tea was an earlier tweak (lifehack?) from last year when I switched from Earl Grey. As yummy as Earl Grey was, I tended to like it with a lot of cream and sugar which I'm sure negated any health benefit. When I also found out that Bergamot inhibited the body's uptake of Potassium, I promptly switched. I'd been suffering from some pretty bad calf-cramps at night and ever since switching to green tea they're gone. I'd always connected the cramps to a potassium deficiency, but I couldn't figure out why I was so deficient.

I'm going to continue to either remove an unhealthy habit or add a healthy habit to my life once about every 3 weeks this year (since they say... somewhere... that it takes 3 weeks for you to turn something into a regular habit). Later in January I started doing sit-ups and push-ups and now I'm into Portion Control...

To see how these changes affect me, I'm tracking my weight and waist measurement (around my belly & love handles, not where I wear my belt). Both dropped significantly after giving up soda, but have since plateaued and actually rebounded a bit. But hey, that's OK, this isn't about weight, it's about living healthier. And I do feel healthier.

Future tweaks will include giving up fried foods (yes, no more french fries, though I may have to make an annual exception for latkes), starting to walk on the treadmill again, eating less red meat, adding more fruits and veggies to my diet, etc. So far it's been easier to remove than to add, but that's to be expected.

So wish me luck and I'll try to post more frequently to keep you up to date on my progress and as an added incentive for me to commit to some of the harder tweaks (since I'd rather not report failure).
Posted by Gomberg at 11:19 PM No comments: Links to this post