I've been getting a lot of e-mail from friends about the upcoming election. I have friends on both sides of the spectrum and some in the middle, so it's an interesting array of messages that I find in my inbox these days.

What's concerning to me is - both in these e-mails and in conversations I've had and overheard recently - there's more pertaining to race and gender than the issues. I worry that as the election draws nearer, it will become more and more about race and gender than issues, and that's somewhat frightening.

Let me try to sum this up for everyone that's been inspired to vote based on the race or gender of the candidates:

Study the issues. Learn about the candidates. Make an informed decision.

A lot of our friends have been asking for pictures of our Addams Family pinball machine. So without further ado... 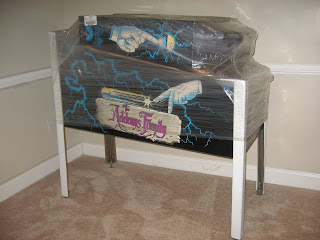 The game arrived wrapped in the shipping industry's version of saran wrap. A previous job taught me it's also useful for securing coworkers to chairs. 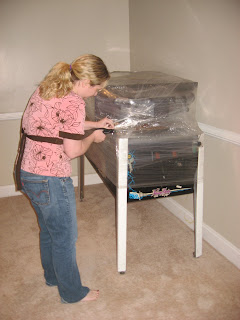 Misha wasted no time opening up her new treasure. Well, actually we waited 3 days. Until we had a night that Connor went down early and there was nothing else to do around the house. 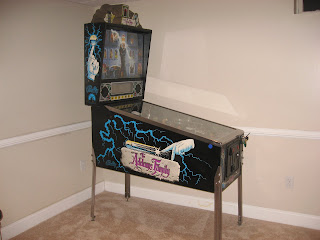 A standalone shot of the game. Yes, we have a low ceiling in the basement. 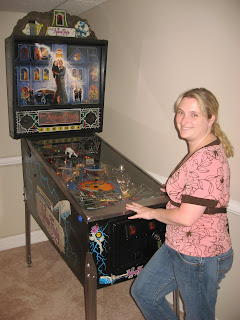 A portrait of the machine and its owner. Misha had me retake this so it would say "The Addams Family" in the display. We've since found out you can also create a custom message, so the machine now also says "Gomberg Family Pinball". Cute, huh?
Posted by Gomberg at 7:39 AM No comments:

Can I tell you how much I hate hurricanes?

Usually when it rains here, the wind blows from the southwest so it hits the front of our house, but these hurricanes are changing the wind's direction and causing the rain to hit the back of our house... with unfortunate circumstances.

See, when we moved in, there was no way for the dogs to get outside. Making matters worse, the doors to our backyard are all full-pane glass, so we couldn't cut a dog door in them. So we settled on buying a slab at Lowes and a dog door and installing both in a temporary solution. Very temporary... no weatherstripping at the bottom (which made for cold toes in the winter) and some insulating foam keeping the elements from using the dog door frame as a personal invitation to come on into the house.

Trouble is, this was never meant to have been used as long as it has and now it's the rainy season.

When Gustav rolled through, we got our first taste. The rain pelted the back of the house and poured down in torrents. Opening the back door, you'd think all our gutters had clogged from the amount of rain that was hitting the back of the house. Trouble was, this rain was streaming down the walls and door and straight into the framework of the dog door and into the house through the bottom of the frame. Not a lot of water, but we've got hardwoods in the kitchen, so it was important to take care of it. Rain was also coming in under the door due to the lack of weatherstripping. Luckily, we were home and caught it quickly and the rain didn't last long.

Now, Ike's upon us (well, not quite the way it's upon Texas at the moment... not even close) and we got another drencher against the back of the house, but this time water was streaming into the kitchen and onto the wood floors like someone had turned on a faucet.

I'd bought weatherstripping for the bottom of the door... I just hadn't gotten around to installing it yet. I figured that I'd have to take the door down and lay it flat to install the weatherstripping and screw it on properly. Picking up the door when I bought it almost gave me a hernia, so I wasn't looking forward to pulling it off it's hinges and lugging it around again. But in the heat of the moment, it dawned on me that I could just slide the weatherstripping onto the bottom of the door from the side, thereby fully realizing installation without also realizing a hernia. So out comes the weatherstripping and I open the door allowing even more water in from the deluge. About halfway onto the door I realized the folly of this plan: It was getting harder to push on the further it went and now I couldn't close the door at all without either finishing the installation or removing it completely. Some help from my wife and a hammer later, the strip was on and the door was closed. No more water from under the door, but it was still streaming in like a faucet from the dog door.

I opened the door again, inviting in the rain, and realized that the foam insulation that the installer had used to "weatherseal" the dog door to the rear door was cracking and most likely was the culprit. It also dawned on me that the foam did a great job covering the areas where gaps had been created by the door's panelling, but wasn't used at the areas of the dog door that were flush with the wood of the rear door. Both the foam and these exposed areas would have to be sealed... and fast. Trouble is, the door is wet, the dog door is wet and there's nothing I have on hand that will seal a hole without having a nice hot dry sunny day to set properly for several hours. We were running out of towels, so I ran to Home Depot (it's juuuuuust closer and easier to get to that Lowes and I needed a solution fast) leaving Misha with Connor to look after the door and the floor (and Connor, of course).

After several ideas that didn't pan out (either the suggested solution wasn't waterproof until dry or wasn't going to fill a hole, only seal a seam) Home Depot was able to direct me to a roofing sealer that plugs into a caulking gun that promised to seal roof leaks while wet. There was even a picture of a guy in a yellow rain slicker up on his roof right on the tube. I was sold. Of course, I've never used a caulk gun, but how hard could it be.

Of course, by the time I get out of the store, the rain's lightened considerably, but it's still drizzling so there's a chance that there's still an issue at the house. I rush home and set up the caulking gun, then reset it after realizing how to pierce the tube to get the stuff inside to squeeze out and then I'm in business.

The stuff is like tar and smells almost as bad. But it's viscous and oily and seems to be causing the water to bead on its surface, so it just might work. You're supposed to spread it around with a putty knife, but I don't have one, so a finger will have to do. Trouble is... this stuff gets everywhere... it's like tree sap. Later I'll realize that in order to clean my hands I need yet another "shop" item that I don't own: waterless hand cleanser (not to be confused with waterless hand sanitizer... I think I actually heard the goo laughing at me when the sanitizer touched it).

So I finish the job in my raincoat on the back porch (I can imagine what a sight I was) and use paper towels to wipe up the excess gunk so the dogs don't get any on themselves when they come through the door (because, people?... This stuff ain't never going to dry) and then go hunting for my wife's nail polish remover to get rid of the stuff that's now thoroughly coating at least half of my fingers. I must say, it did a great job getting it off my nails. The skin? Nothing. Well, almost nothing. It took a while but I was able to get it to a state somewhere between "still dirty" and "no longer sticky" so I was happy and figured either I'd get it out in the shower the next morning or wait until the outer layer of skin died off and took the gunk with it.

So emergency averted, floor dry, long overdue task completed, handyman sense of accomplishment achieved (AARGH-argh-argh-argh) and now it's no longer raining so I have no idea if it really works.

But it sure looks like it will.
Posted by Gomberg at 10:14 PM No comments:

Just yesterday we were talking to my sister and commenting on how long it had been since Connor's first 2 teeth came in. We were thinking he's been teething again from the way he's been fussing recently and his upper gums look "ready", but still nothing.

Then tonight, I'm putting some Orajel on him and there it is, a new tooth just barely poking through the gums. So Connor's top front left tooth is on its way in now and I expect the right side isn't far behind, just like with the bottom teeth.

That's all, just wanted to share.
Posted by Gomberg at 10:10 PM No comments:

You know, when I think back over the past 9 months and compare them to the nine months Connor was in the womb during which we sold and bought a house, moved across country and changed jobs... I'm not sure which was the easier 9 month span.

All I know is I wouldn't trade the memories of either for anything.
Posted by Gomberg at 10:05 PM No comments:

Misha and I celebrated our second anniversary today. We've actually been together for almost 6 years now. Sometimes it's hard to believe.

We celebrated by feeding Connor dinner, playing some Addams Family pinball and eating the dinner I made (New York Strip steaks, mashed potatoes and veggies) while watching an episode of Law & Order: Criminal Intent on the TiVo.

We're going to wait for the weekend to get out and really celebrate. Labor day weekend was spent doing things around the house and besides... EVERYONE's out and about Labor Day weekend, so we'd rather wait until attractions and restaurants have calmed down.

It's been an amazing and wonderful 2 years... here's to many, many more.