The more I hear about MRSA, the more of a germaphobe I become. Unfortunately, this has led me down some paths of truly bizarre logic.

Take, for instance, the the door to the men's room at my office.

Like most men's rooms, you push the door to open it. And like most there's a metal plate where you're supposed to do the pushing.

For as long as I can remember, I've always avoided the "men's room door plate" like the plague, envisioning all the other people who've touched that plate and figuring that I was literally avoiding the plague by avoiding the plate. I've picked some spot above or below or to the side of that plate to push on instead.

Today I had an epiphany as I was approaching the men's room: That door is filthy. The plate is shiny with nary a finger smudge on it. Everyone else is ALSO avoiding the plate which, when you think about it, is THE ONLY PLACE ON THE DOOR THAT ACTUALLY GETS CLEANED REGULARLY BY THE HOUSEKEEPING STAFF.

So now I just go outside and pee in the bushes.
Posted by Gomberg at 7:46 PM 1 comment:

On the way home from work today, as we're pulling into the daycare parking lot, my wife says to me "Oh, by the way, Connor got a fat lip at daycare today."

Turns out it wasn't as bad as I'd envisioned it. I've been gifted with a fat lip once in my life as a result of a Karate punch that wasn't pulled as well as it should have been by the guy I was practicing with in class and it wasn't pretty. I was really not looking forward to seeing any infant with a fat lip, let alone my son. However when we arrived at his room, he was sitting in a teacher's arms, looking a little unhappy and only a little swollen with a tooth-width scab on his upper lip.

Apparently the little guy was exercising his will in class and when he was moved from a place on the floor that he apparently wanted very much to return to, he scrambled off faster than his little arms and legs could take him and face-planted into the linoleum, biting his lip in the process.

Fortuitous - and I guess you could say somewhat serendipitous - that I picked out a red shirt when I dressed him this morning. Though as a Star Trek fan I should have known better...

So now we're home and he's doing well. I figure the scab will be gone in a few days since babies heal quickly. I just hope he heals better than I did... I can still feel where my lip met my tooth over 8 years ago.
Posted by Gomberg at 7:36 PM No comments:

Today, we took Connor to the Charlotte Renaissance Festival. It's 20 acres of shops, food and characters with 6 stages offering constant entertainment. It's only the second Ren Fest I've ever been to. The first was in Laguna many years ago and we didn't stay there long, so I really can't say how they compare against one another.

Along for the ride were our friends Mary and Eric and their daughter Lila who was born 3 months ago. My sister's family was also there. The original idea was for us to all meet up and hang out together, but Francine got there before us (we were late) and between juggling babies, lunch and too much noise to hear your cellphone most of the time, we only bumped into Francine, Rob and Sam a few times.

Everyone had a lot of fun. We started the day by feasting on turkey legs and "Steak on a stake" for lunch. Eric and I shot crossbows and tried our hand at the thing where you use a huge mallet to try to knock a slider up a rail to ring the bell... whatever that's called... the only sign on the thing was "Play at your own risk". Misha and Mary took Connor though a maze and found a "gold" coin which was really plastic and a gimmick to get kids to run through the maze since you got to keep all the coins you could find. Connor wasn't too thrilled with the slide you had to go down to reach the exit though. Then, there was the Fudge vendor (yum) and the mead from ye olde pub (yum) and we wrapped the day with the Petting Zoo (stinky and oddly overrun with spiders). We all returned to the car tired and ready to go home.

I think I still smell a bit like dirt and Turkey Leg.

Some pics from the day: 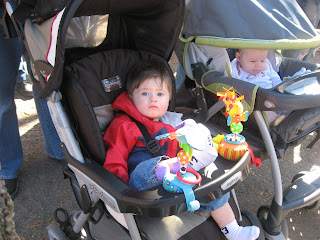 Connor and Lila arriving at the Festival 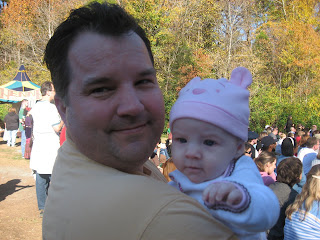 Eric and Lila. She got lots of compliments about the cute hat. 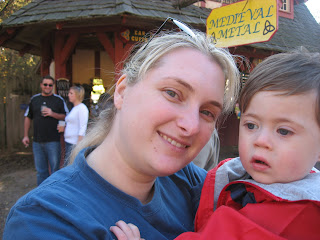 Misha and Connor. I was taking this sideways and couldn't see the LCD so the composition's off, but I still like the shot. 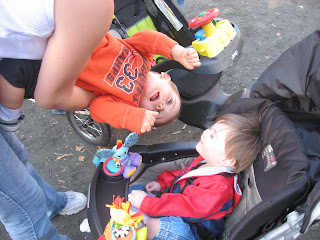 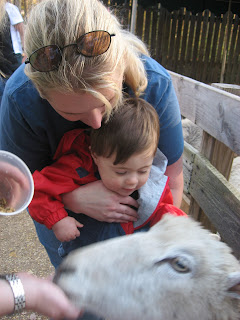 The petting zoo was a hit until we got swarmed through the fence by sheep. 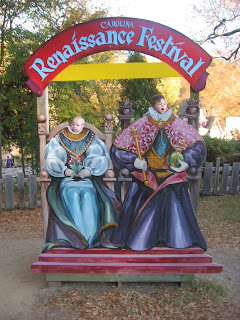 "Oyez! Oyez! King Connor and Queen Lila decree that the day is over!"
Posted by Gomberg at 8:19 PM 1 comment: