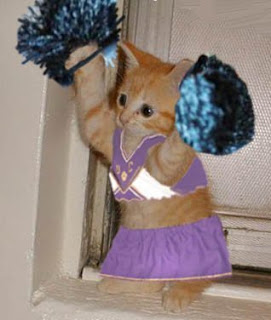 242.8 pounds. Not the heaviest I've ever been but within 10 pounds of that mark, so a good time to start moving back down the scale.

I'm not going to measure my waist or anything, that's just too depressing.

And no pictures tonight. Working on a huge deadline for work so that's been consuming me. Maybe I'll snap a pic this weekend. Something really unflattering like you always see as the before photo on those commercials. Y'know, the ones you look at and say, "really, you couldn't find a better picture?"

I realize that in my last post I promised something by the 20th and in my usual blogging fashion I have missed that deadline. I realize I also may have built it up a bit too much. Because what I'm basically announcing is... 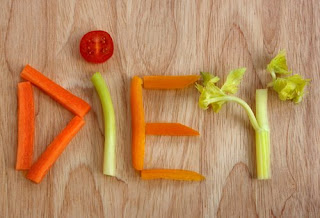 Yes, you read that correctly. In about 3 months I'm going to turn 35 and I'm tired of being as large as I am, I'm tired of getting winded walking up stairs, I'm tired of not fitting into T-shirts that I used to be able to wear... but mostly I'm just tired.

Thing is, diets work for me, been on quite a few in my time. It's when the diet "ends" and I gain it all back that's the bad part. And the reason I gain it all back is that whatever I was doing to lose the weight has ended and I'm right back in my old tricks.

My goal is to lose 30 pounds in the next 3 months. That's 10 pounds per month or roughly 2.5 pounds per week. I'm going to post my weight here to keep me motivated and honest, maybe even post some pictures. I was thinking about also posting my daily meals, but that might be overkill and I'd probably get sick of doing it and fall back into my old ways if that happened. Any advice or motivation from the 4 people reading is greatly appreciated.

1st weigh in and photo tomorrow. See you then.
Posted by Gomberg at 9:00 PM No comments:

What the hell happened to June?

I just realized that it's been almost a month since I last updated this blog. Damn.

Y'know, you start out the year all revved up and swearing that you'll contribute more to the endless rambling of the blogosphere and then you end up doing noble things offline instead and forget about the inter-people.

Seriously though, June was a quick one, not least of which was due to the fact that I spent most of it getting ready for a week-long conference in Anaheim where I was presenting GS1 Data Standards to my company's members. Lots of build-up for a 1 hour presentation that was at lunchtime 4 hours before the opening General Session. Yeah, we had a whole 10 people show up. But hey, they got what they came for. :)

Beyond that.. what else has been going on?

I saw Star Trek a second time. I always find a second viewing interesting because I can completely ignore the story and instead focus on the little details that make a film a richer, even if you were completely oblivious to them the first time around. Like the Tribble in the cage next to Scotty on the ice planet. Completely missed it the first time, but you really can't ignore the "trilling" sound when you know it's there. Apparently there's an R2D2 in the ship wreckage as the Enterprise enters Vulcan space, but I wasn't able to see it.

Perhaps the coolest "little detail" was in fact quite little, but definitely the type of attention to detail that wins points from me: the pattern on the fabric used to make the Starfleet uniforms. At first I thought it was just some hounds-tooth or snakeskin-type design, but at one point you get a really close-up shot of Spock's shoulder and there it is, clear as day: 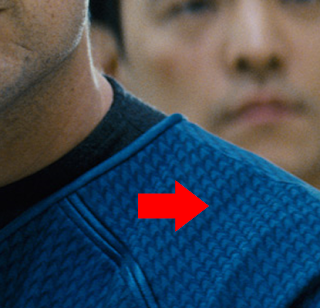 Yup, that's a bunch of tiny little Starfleet insignias. How cool is that?

Anyway, moving on, back down on Earth, we've been getting along pretty well. My parents spent the last half of June out here with a side trip to Florida in the middle. We all went up to the Great Wolf Lodge in Concord (a hotel with an indoor water park that's only open to guests). Connor loved it (and so did we!) July 3rd we took in the fireworks at the Charlotte Symphony performance in South Park. Connor wasn't so thrilled with that, especially the really loud fireworks and the screamers. I tried to convince him they were just bubbles... loud, exploding, fiery bubbles I guess... and that seemed to calm him down.

Along the way, he turned 19 months old. Here's a bunch of pics from his 19th month.

More posts soon, I've got something big in the works that I'll post on or before 7/20... It will be a huge thing for me, assuming I can pull it off... so I leave you with something to look forward to.
Posted by Gomberg at 11:14 PM No comments: