We've reached that point where every time we pick up the phone or call someone, we're bombarded by the "has she given birth yet?" question. We've almost bypassed all of the due dates that various people and websites have given us. The last date on the list is today, so I guess we've still got a few hours left before she's officially, officially, officially, etc... late.

(Side note: I just had to flee to our bedroom to escape Celine Dion on Dancing With The Stars... I can still faintly hear it singing. I'll have to sterilize my ears later tonight...)

The funny thing is, we keep getting the "has it happened yet?" questions from my parents and other people who are pretty much a given that we'd call them within the hour if not immediately.

Has it happened yet? No

Are we ready? Yes. She more so than me for obvious reasons.

Will you call me when it happens? If your relation to us could be called nuclear or you stood (or almost stood) in our wedding, then yes. Everyone else will get a call or e-mail once we have time to come up for air.

That reminds me, I should invest in snorkels. 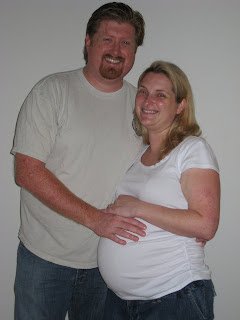 Um, how'd you know that was what I was going to ask?

And could she be any cuter pregnant?

Because you're pretty much the only one who hasn't asked already. ;)